A Trick of Time Dilation

Have you ever been in an extremely stressful or life-threatening situation and noticed how time seems to slow down? Everything from being in a fight to being in a car crash can cause this feeling. But is it really time dilation? 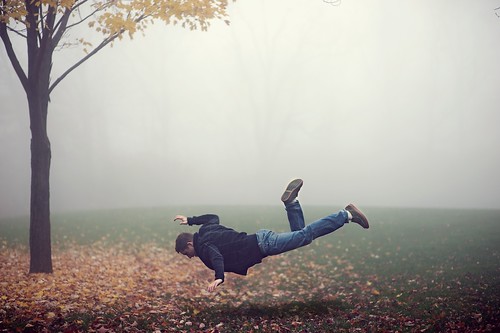 Dr. David Eagleman tackled this question by giving his test subjects a chronometer that was going too fast for the human eye to read under normal circumstances. If time really slows down when you’re afraid, then surely the subjects would be able to read the chronometer when they fell 150 feet in the test, right?

That’s not what happened, though. They were terrified, and they did experience what felt like time dilation (they “remembered” falling for several seconds longer than they actually did). But, none of them could remember anything but the usual blur on the chronometer.

Further tests seem to indicate that this false sense of time dilation is a trick of the hippocampus, the part of the brain responsible for forming memories.

In a normal day, your senses are inundated with information. You walk past several people, trees, and birds on your way into a department store, but you won’t remember them. You’ll see hundreds of items on the shelves, hear announcements over the PA system, and experience several tactile and olfactory sensations before you leave. You won’t remember most of this, because your brain is smart enough to filter out what’s not important to you (most of the time) so it doesn’t clutter up your memory.

But in a life-threatening situation, that all changes. Suddenly, everything is important, because it may give you an advantage in surviving. So your brain records it all and writes it into memories. Because you’ve written so much more into memory than usual, it results in the feeling that the life-threatening moment slowed down or lasted forever.

So what are the implications here?

Although people believe that this time dilation gives them more time to think and to react, it’s possible that it does the exact opposite. The whole point of avoiding writing so many things to memory is so that our brains aren’t clogged up with useless information. So I wonder if writing so many details to memory in that moment might interfere with our ability to judge what’s going on and quickly react to it. (Perhaps not, because the hippocampus may not be involved in the decision-making part of the brain.)

Secondly, it’s possible we may not even be able to perceive the present. Being in a life-threatening situation makes us feel like time slows down, but that’s a trick of memory (remembering the past). So if we don’t have an accurate memory of that moment, and our experience of what was perceived as the present was immediately overwritten by a memory of the past, then maybe the present never really exists for us at all. Maybe we can only sense the present a split-second after it becomes past.

So the hippocampus is hyperactive when we’re in scary situations, causing us to remember more details about that moment and to retain those memories for a longer period of time. What if we were able to tap into that ability and “turn on” this super-recording of memories at will?

This could be useful for times when you’re not in a life-threatening situation, but want to remember everything for later. Like being on a wonderful vacation or honeymoon. Or when you see what looks like a burglar sneaking into your neighbor’s yard at night.

Of course, even remembering extra details about the alleged burglar may not be enough to thwart the inherent flaws in eye-witness testimony. If you thought the car speeding through the red light was green, but the police officer asks you, “Was it a red car?” (suggestive interrogation) you may actually answer yes. That’s how easily false memories are created.

So being able to consciously use the time dilation trick would be more useful when combined with some sort of “backup” memory container, like an external harddrive for your mind. It would then be free from accidental modification that creates false memories. Maybe you could even upload those memories back into your brain to relive again and again, free from fading. And even if you uploaded them and then modified them accidentally (thereby creating false memories), the originals would preserved.

And for the entrepreneurs out there, with the ability to backup your hyper-recorded memories, you might even sell that memory of a nice day at the beach to, say, someone who’s stuck on a spaceship for decades.

What if? What would you do with the ability to hyper-record memories?