Apparently plenty of people still think women are less interested in science fiction than men. I was dismayed to read this question in a recent interview of Christy Johnson (chair of the Millennicon sci-fi convention that just took place this weekend): “Most people have this idea that science fiction is a ‘guy thing.’ How does the convention combat this idea?”
And this is not just word on the street. Hollywood recently demonstrated epic marketing fail when it decided to remove “of Mars” from the title of the John Carter movie because it might somehow “turn off” female viewers. What’s going on here? I suppose if you’ve seen the old pulp covers full of buxom women in, errm, odd scenarios, it’s obvious that sci-fi used to be targeted to the male demographic pretty heavily. But we’ve gotten away from that. Looking at the larger genre, fans now complain that too many SFF covers feature hooded men.

So my guess is that it has to do with that pesky word “science.” Because, you know, women don’t like science! Ladies don’t do well in the maths and sciences, right?

In the 1990s, several studies seemed to show that girls in school suffered from stereotype threat — that by being told that women don’t perform well on math and science tests, it became a self-fulfilling prophesy.

More recently, The Guardian reported on “experts” warning that girls consider computer science to be too geeky, making girls disinterested in taking up the subject. It’s certainly true that fewer women than men take careers in the STEMs (science, technology, engineering, math).

But the stereotype threat studies were flawed. It turns out girls do just as well in math and science as boys do (except possibly in spatial-recognition tests). So, as The Guardian suggested, do women consider it too “geeky” or are they afraid that men might be threatened by women who are somehow too “brainy”? Perhaps some women believe that, sure.

I think many women avoid math and science careers for a more obvious reason, though one I’m equally unhappy about. (And of course, I’m hardly the only one to reach this conclusion.)

With a mean work week consisting of upwards of 47 hours, the maths and sciences are a bastion of work / life imbalance where women are forced to choose between the career track and the mommy track. In the US, working women are still the primary caretakers of children and do more housework than their husbands. 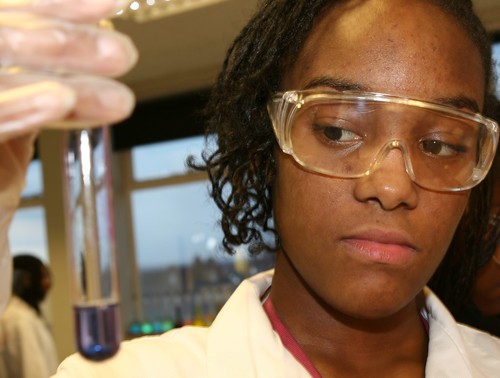 In the test tube#3 by Lab Science Career | Flickr

So when a study shows that “women who were primed to think about romance were less likely to be interested in STEM or to choose it as a major,” the reason should be fairly clear. As much as we strive toward equality in the workplace, most women are aware of the inequality that still exists in the home.

Notably, the same study also suggests that the college-aged women didn’t consider being brainy as a turn-off. Looks like it’ll just take some time for public perception to catch up. Women like the maths and sciences well enough, perform well enough in them, but for other reasons, don’t choose them as their professions.

Science fiction, which doesn’t demand we choose between it or the daily requirements of life, is just as much fun for us as it is for men. A US National Science Foundation study in 2001 has the numbers to back this up.

And if you still don’t believe me, check out the periodic table of awesome authors. Let’s just say, one does not become a famous author in a genre one dislikes.

Comments Off on Female Readers and Sci-Fi