I loved Batman Begins and The Dark Knight. I liked their dark grittiness, their villains, and their plots. But I came away from The Dark Knight Rises with “meh” kind of feeling. It took me a few hours to put my finger on why. There were plenty of things I also liked about this movie, but I’ll try to go from negative to positive in this post. Which, you know, means SPOILERS.

LOADS AND LOADS OF SPOILERS. SERIOUSLY. STOP READING NOW if you haven’t seen it yet.

Let me state for the record, I never read the comics. (Okay, maybe a couple.)

Bruce Wayne is crippled when we’re reintroduced to him at Wayne Manor. Through sheer willpower he gets back into shape, with a little help from a leg-brace, which apparently compensates for all the physical ailments a doctor lists at one point. Batman does a lot through sheer willpower in the other movies, so I suppose I can get behind that.

But then he fights Bane, who cripples him again, messing up his back. In what we’ll call the Pit of Despair, a man punches Bruce in the back to put the “protruding” vertebrae back into place. Ouch. And then Batman’s plan to defeat Bane is to what? To fight him in hand to hand combat again. Really?

That’s not dramatic or even interesting, since Batman already fought Bane, and we already saw the outcome. But surely Batman has a plan that’ll help him defeat Bane this time… And he does: Batman now focuses his attacks primarily on Bane’s mask (whereas in the previous fight he avoided it, probably just considering it as a type of armor). That’s the whole plan? Apparently, yes.

The plot twist was a let-down. Bane is the enemy, yes, but he turns out to be more like Miranda’s pet. She’s actually Ra’s Al Ghul’s daughter, Talia, the only person to have escaped the Pit of Despair besides Batman. (Which may be unlikely, but let’s just go along with it and say it’s due to Talia and Bruce both being more well-fed and having stronger willpower than any of the other prisoners, who were malnourished and defeated in spirit.)

I don’t think Bane says anything while she’s toying with Batman, which, to me at least, is a sign of subservience. As soon as you make a villain subservient, he loses credibility. He becomes a lackey, which is what happens to Bane. Or as SciFiNow puts it, he becomes “someone to punch.”

And Talia even takes this time to explain their whole backstory, because we didn’t see any of it in the movie. Major problem there. Any good storyteller can tell you the climax is not the time to add backstory, reminisce, or plug plot holes.

And instead of plugging plot holes, they create one. Bane/Talia were kicked out of the League of EvilShadows. And yet it’s only when Batman kills her father that she realizes she wants to do exactly what Daddy wanted all along: Destroy Gotham. Really?

I understand the desire to tie the trilogy together with a plot arc or major reveal, but that was poorly executed.

The timing and methodology of Bane and his crew will leave you scratching your head (see my friend’s review over at anarchy is hyperbole). For instance, wasting time and effort getting ensnared by the CIA just so they can kidnap the only person capable of neutralizing the bomb. Just to kill him in front of a crowd of people who may or may not believe that to be the case.

Miranda hangs out for years so she can weasel her way into the Wayne Foundation and Bruce’s good graces  (read: pants) so she can stab him in the back (read: ribs) later. Smellin’ a lot of “if” coming off of that plan. And of course, she, like every villain in classic James Bond movies, has to tell her story to the hero before killing him. Or, letting her lackey kill him, which is also typical.

And ultimately, Bane also has the same classic James Bond villain downfall: He lets the hero get away. He tucks him into the Pit of Despair and assumes he’ll stay put until he gets around to torturing him some more. Perhaps this demonstrates Bane’s fatal flaw, ego, but it bugged me.

As stated above, Talia’s motivations for wanting to destroy Gotham are suspect. But SFSignal raises an excellent point: “Why would Bane be so obsessed with the destruction of Gotham?” It’s not as evil as it once was, surely, even if greed is still rampant (thus his attack on the stock market). And while we’re talking about motivations — how does Bane inspire such fanaticism in his followers?

In some ways, the order of events in the trailer made more sense than the actual movie.

There were plenty of other things that bugged me. Bane’s voice, for one. The music drowning out dialogue, another. As SFSignal pointed out, the utter absence of the Joker, even though we see the reappearance of Scarecrow. (The actor is dead, yes, but surely someone could have remarked on why the character didn’t reappear despite all the criminals being released?) The flimsy insertion of anti-Occupy Wall Street sentiment. I could go on, but let’s change gears and talk about the merits. 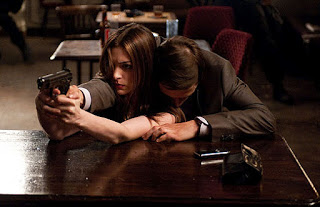 Catwoman: She had a character arc and stood on her own. SFgate really called it: “It’s the first time someone actually thought through the role of Catwoman in the writing stage and gave a good actress something to play; that is, beyond the demented sexpot of tradition.”

No undermining of Gordon: Blake called his hands “filthy” for his coverup of the true nature of Harvey Dent, but for all that, Gordon’s fundamental goodness isn’t undermined. Nor is his competence. Blake goes to save Gordon at the hospital, only to find Gordon already has things under control.

Alfred’s relationship with Bruce: Although I felt like it came too early in the movie (before Batman had seen any real trouble), I thought Alfred’s role lent the movie some much-needed verisimilitude.

Batman’s death: While I would have been happy with the way Batman died, when Alfred says he failed him at Bruce’s tombstone, I hated the movie so much! But then Bruce fulfills Alfred’s dream so perfectly, it was heartwarming. That was fantastic. And the way Fox finds out is great.

Batman’s legacy: This wouldn’t have felt like the proper end of the trilogy without the legacy being passed on. Joseph Gordon-Levitt wouldn’t make a good Batman, but that’s not the point. I was annoyed when he tossed his badge away, but that freed him to take on the responsibility of being Batman.

So in the end, I’d say it’s a good action movie with some great special effects and fantastic acting (really, trying to act with just your eyes showing!?), though it could have used plenty of editing on the script before it was filmed. I found the Avengers (see my previous review) much more enjoyable, and certainly not just because The Dark Knight Rises is more serious in tone.

My note above about spoilers counts for comments, too! I haven’t seen Spider-Man yet, so I’d be interested to hear comparisons to that as well, though preferably without the spoilers. Or come find me on Google+ or Twitter instead.

Comments Off on The Dark Knight Rises movie review