Over the weekend, we attended the second annual illogiCon, a science fiction convention in the Raleigh-Durham area of North Carolina. +David Dorian Granruth and I dressed in our fine steampunk regalia on Saturday and saw lots of other great costumes, including a bunch of jedi, other steampunks, a Malcolm Reynolds, a couple storm troopers, and a Captain America who looked a lot like Chris Evans.

I would bet money that this year’s illogiCon was even smaller than the first annual ConTemporal we attended last year (see my ConTemporal 2012 recap). But if you’re an introvert, this is the kind of convention you want to attend!

Cons Are Great For Fans

For fans and readers, cons like these are a great place to have hallway conversations with other fans. There was a gaming room, and the dealers room had plenty of good stuff in it, especially for readers, fan art collectors, and tabletop gamers. +David Dorian Granruth picked up a co-op game called Elder Sign, which is based on the Cthulu mythos and was reviewed on Geek & Sundry’s Tabletop Episode 11. We’ve played it once so far, and though it’s a bit complicated, it’s fun and fairly easy after the first game.

Some serious gamers were at this year’s illogiCon. Let’s just say that while the entire rest of the con-goers were stuffed into one tiny room to watch the Nerd-Vana Burlesque Show, the gamers complained we were being too loud. Yeah. That’s hardcore.

illogiCon didn’t have tracks, per se, as there were only three panelists’ rooms. One was dedicated exclusively to authors’ readings of their works. The other two were panels, most of which were geared toward genre writing, which I enjoyed.

The EMAA demonstrated their skills, but this time with light sabers instead of medieval weapons! It was great fun, and they made skits out of the fights to add some humor. I loved it, and am extremely jealous that they have schools in Cary, Greensboro, and Holly Springs, but not Charlotte.

+1 Weapon of Suicide was a hilarious panel led by the EMAA with a lot of fan participation. We all tossed out examples of fantasy weapons that drive us crazy, because they just make no sense. An example is the Klingon weapon, which is too top-heavy to allow for effective blocks. Or swords that shoot their blades. Or pretty much any weapon in the Final Fantasy franchise. Making fun of the games, movies, and anime we love somehow never spoils our enjoyment of them, so it was an entertaining hour.

On Friday we had a great time talking with Clay and Susan Griffith and listening to them read from their Vampire Empire series. It’s been on my to-read shelf for a while, and I want to read it now more than ever. I probably should have picked up a copy while I was there, but my mind was elsewhere after the wisdom Clay and Susan imparted about their publisher, Pyr, their recent success landing a book contract with Del-Rey, and so on.

We also listened to John Hartness reading poetry, of all things! I didn’t know he’d written any, and several were very touching. I know John from Charlotte writers’ groups and was glad to get to see him at the con. He also read from his new Black Knight Chronicles and imparted some great advice in the Self-Promoting Without Going Broke panel, which I’ll talk more about below.

We treated this weekend like a vacation, so I didn’t attend as many writing panels as I did at say, ConCarolinas (see my 2012 ConCarolinas recap). The main ones I remember were Science Fiction and Ethics, Ebooks, Monsters, Humanizing Your Villains, and Self-Promoting Without Going Broke. 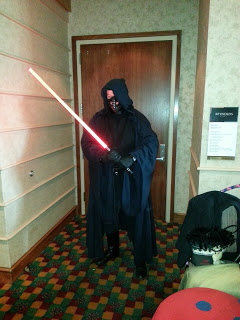 Science Fiction and Ethics was a very thought-provoking panel with Warren Schultz, M. David Blake, Ada Milenkovic Brown, Mark Van Name, and John Kessel. The discussion ranged from real-world ethical issues (the “white-washing” of book covers, where black characters are drawn as white to sell more copies, supposedly) to moral uncertainties fictional characters faced. A big point of the panel was that cultural change can render anything distasteful over time, and as writers, we don’t know what we’ll write today that will be looked down upon tomorrow.

The ebooks panel didn’t present me with any information I didn’t already know. It also devolved into a big promotion of Baen books, which didn’t sit well with me. I’ve been to a few cons now, and I’ve never seen authors promote their books as conspicuously as these guys promoted their publishing house. But I didn’t feel like I was missing out, because so much information about ebooks is online these days.

The monsters panel was a good blend of fan information and writer information. They discussed the monsters they hope to see come back into popularity, as well as how to write a good monster. Also up for debate was the difference between horror and terror, monsters and villains, and the “force of nature” type monster versus the more understandable monster.

Great moderator on panel on villains at#illogiCon. “How important is it for a villain to be evil … or is it about motive?”
— Traci Loudin (@TraciLoudin) January 13, 2013

The panelists pointed out that many villains aren’t “evil” so much as single-minded. The ends justify the means. Other villains really are the heroes of their own story… they believe that much in what they are doing. Many in this category are even self-righteous, and John Kessel made a good distinction between being “right” versus “righteous.”

Misty Massey mentioned a book called Villains by Necessity in which the world becomes unbalanced once all the evil is eradicated, and a “merry band of villains” must go out and cause chaos to save the world. Misty was kind enough to stop by and remind me of its name, so I’ve linked to Goodreads since it’s out of print.

But as informative and useful as the villains panel was, Self-Promoting Without Going Broke was even more useful to me, in that it provided me with the most new information. Jennifer Westmoreland suggested quoting characters and teasing the book before it’s even finished. John Hartness recommended that writers always accept all friend requests on social media, and connect with people as a human being, not a promo-bot. This panel gave me a lot of other great ideas that are going into my notes for future book marketing campaigns.

If you haven’t been to a con before, going to a smaller local con like this one is a good place to start. You’ll get a much more laid-back experience and be able to connect one-on-one.