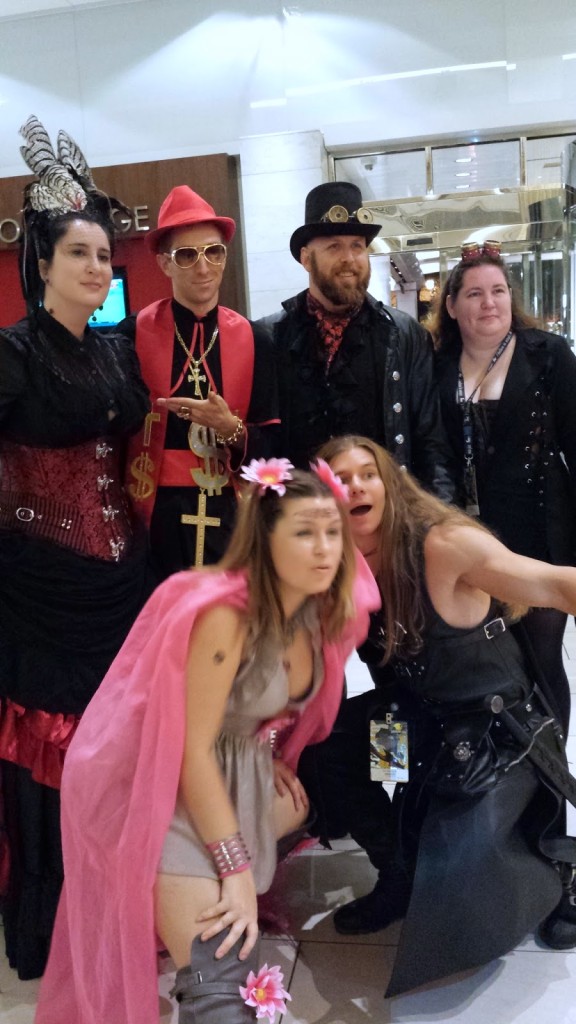 This post is second in a series where I share the wisdom from the science fiction and fantasy authors who lectured at Dragon*Con 2014 in Atlanta, Georgia over Labor Day weekend. Clicking on the topics in Part 2 below will jump you down to those sections.

See part one to read about the non-writing fun we had.

These fantasy authors related some awesome anecdotes from their writing careers. But first, intros:

Laurell K. Hamilton is best known for her NY Times Bestselling Anita Blake: Vampire Hunter series and her Merry Gentry series (set in Fairie world), both of which are urban fantasy. She has over 30 published books available.

Lynn Abbey is best known for her work in the Thieves’ World shared-world 12-volume anthology series and in the Dungeons and Dragons universe. She has 20 or so published books available, as well as being in numerous tie-ins and anthologies.

Katherine Kurtz is best known for her NY Times Bestselling Deryni novels and has around 40 published books available in the modern fantasy genre.

Chelsea Quinn Yarbro may be best known for her historical horror series about the vampire Count Saint-Germain, but she has 92 published books available, so you may know her from many other series, like Messages from Michael.

In the mid-80s, editors told Hamilton that her “mixed genre” fiction wouldn’t sell, but of course she helped kick off paranormal romance. Lynn Abbey was also told that her female sword and sorcery wouldn’t sell. Chelsea Quinn Yarbro was told that you can’t write a “positive vampire,” but her Hotel Transylvania ended up in book clubs and kicked off her career.

Developing as a Writer

Yarbro says she thinks she’s gotten better as a writer. Kurtz says her genre didn’t exist yet and started with simpler plots originally. Abbey says her craft has gotten better, but she writes about generations differently now that she’s older.

Hamilton says she’s definitely a different writer than when she started. She started out with elves and dragons but she was told the market was dead. She didn’t know how to write a book and stumbled her way through Nightseer, the first novel she ever wrote (except for its sequel, she has no trunk novels). Now as the writer she is, she would write the sequel differently. She can “write without flinching,” and she’s afraid that would make those books too harsh now.

Pursuing Writing as a Career

Hamilton said it was Andre Norton who gave her the idea that women (not just dead white guys) could write—she realized Andre Norton was a real person. And if Norton could do it, so could Hamilton.

Abbey had to write a story in high school. The Berlin Wall had just gone up, so she wrote about high school kids who were separated. When she was done reading the story out loud, the teacher and the kids alike broke into applause.

Kurtz thought she’d be in space medicine originally. She went to med school and decided to write about it instead. She worked for LAPD. While in LA she went to a scifi convention and made contacts there, and when she sent her first novel out, it got accepted. She was friends with and frequently had afternoon tea with Anne McCaffrey.

Chelsea Quinn Yarbro promised herself at the age of 6 that she’d write 100 novels in her life. She did theater as a teen. It took 2 ½ years to sell her first story. In the next 6 months, she sold 3 more. Anne McCaffrey was one of her mentors later. Her mentors helped her think of herself as a pro writer.

Abbey went to ConFusion in Michigan. She was injured in a car accident on her way to pick up Gorty Dixon, the Guest of Honor, from the airport. He felt terrible and asked if he could do anything. She had him read her manuscript, and he mentored her through craft and publishing.

A teacher gave Hamilton Writer’s Digest magazines, and then she went to a scifi con in her early 20s. There she attended a writer’s workshop. 3 months later she sold her first short story.

I had to leave to meet friends partway through this panel, but what I caught was interesting. Lee Martindale did a great job as moderator, making sure everyone kept to the topic of politics in fiction.

One of the panelists noted that in pre-state groups, around 1/3 of males and 15% of females died by murder (that we know of). That’s understated because we only have bones to reference; we can’t see the soft tissue (so a knife in the gut wouldn’t show up for archeologists). Clearly, humans’ natural state without government is acting our politics out through violence.

In Stirling’s Dies the Fire series (Emberverse series), a man becomes king and his death renews the land. The series is about myth reborn and fighting fire with fire. He explores concepts around superstates: Is the UN really doing what it said it would? Helps with education and health care, not peace. Stirling noted that no politics will work in all situations.

Stirling says he’s always found it easy to write people different from him. He’s an atheist and materialist but his Wiccans came across as advocacy to some. And some fans even converted!

Moon looked at how longevity treatment would affect politics. In her Suiza series, it’s young pitted against old. For her, New Texas went against her own beliefs, making it hard but fun to write, with characters you hate but aren’t bad. She shows that being compassionate is hard. Her characters are honorable people but are also often against her political leanings.

Ringo says he’s a Libertarian neo-conservative if anything. He believes in a small government but is socially liberal. Last Centurion was less socially liberal but was socialist. For him it was like a possession because he wrote 150,000 words in 9 days. However, Ringo says he can’t write someone who’s 180 degrees off his leanings. He considers it a personal failing.

How to Write Politics

People who hold the power think they’re right. Everyone else is delusional, or wrong.

Technology conspires to change which governments thrive and which don’t.

Those in power will have some kind of self-validating myth. What were the initiating ideals of whatever political group came to power? What did they evolve into?

Look for legitimizing myths, such as 51% of the population = right, noble bloodlines, or a deity as founder and ruler.

This post is second in a series where I share the wisdom from the science fiction and fantasy authors who lectured at Dragon*Con 2014 in Atlanta, Georgia over Labor Day weekend. Clicking on the topics in Part 2 below will jump you back up to those sections.

Have you attended writing panels at scifi conventions like Dragon*Con? Leave a comment below or find me as +Traci Loudin on Google+, the perfect place for fans of science fiction and fantasy to hang out.