It’s been a while since Dragon*Con, but I still have notes from 3 more panels I’d like to share with you: Worldbuilding 101, Peopling Your Fiction, and Social Media: Love It or Hate It? 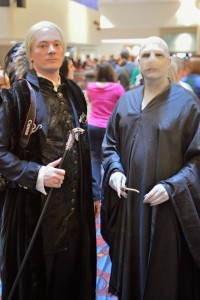 Science fiction and fantasy authors like Chelsea Quinn Yarbro, Jim Butcher, Lynn Abbey, and more gave attendees some insight into how to start developing a world, how to create characters for that setting, and how to use social media once your book is released out into the wilds. Stick around for more after the jump.

This post is third in a series where I share the wisdom from the science fiction and fantasy authors who lectured at Dragon*Con 2014 in Atlanta, Georgia over Labor Day weekend. Clicking on the topics in Part 3 below will jump you down to those sections.

The panelists ran the gamut from sword and sorcery fantasy authors to Amish scifi authors.

Lee Martindale started by asking them how they begin their prewriting. It was pretty much split 5 ways:

When beginning a book, you have to realize that your instincts have been shaped by what you’ve read. You need to discard early ideas and look deeper. Ideally, start somewhere and then the rest begins to reveal itself. Character reveals world, world reveals more characters, characters reveal conflict, etc.

90% of your world won’t actually show up in your story. As long as you’re faithful to your world, readers will follow you along regardless of how ridiculous the premise.

Jonathan Maberry said when he was doing research for his weird zombie story, zookeepers told him they’d release the animals in the event of an apocalypse. So he has rhinos versus zombies.

Reveal the small details to imply the larger world. What can you tell about the world by looking at a penny?

Deciding What to Write

When you’re between projects, you can ask your readers what they’d want to see next. Write a few short stories in various worlds and see which ones get the biggest/best reactions. The readers empower you to try new things.

Michael Bunker says he only writes what he wants to. (He’s self-published.)

Jonathan Maberry says if something doesn’t fit in the novel, that’s what short stories are for. With them, don’t put as much world in, but allude to it. People who read fantasy shorts, they usually fill in the creative blanks anyway because they’re genre fans.

Jim Butcher says short stories are “like trying to have a knife fight in a phone booth.”
Back to Top

When worldbuilding for a shared world, you need a grid that leaves enough holes for other authors to come in and write. Otherwise it’s like you’re doing all the idea work and just asking them to do grunt work.

Jim Butcher went off on a minor tangent/rant about how Campbell (you’ve heard of the monomyth?) was an audience member watching a magic show and trying to tell others how to do it. It’s no good. It’s not a manual for how to write.

The panelists cautioned that editors aren’t necessarily storytellers, so what they ask you to do isn’t always what they really need you to do. Try a different way. They may know where an issue is, but not how to fix it.

It takes months to write a novel, but days to read it. You don’t need to repeat things.

Sometimes it takes you hours to write a scene, and sometimes half an hour. But when you read it, you won’t be able to tell the difference. So keep writing, even when it’s hard.
Back to Top

Sometimes you discover something at the very end that changes everything. Just go for it. Don’t hesitate to rewrite. The beauty comes out in the polish. Make sure the consequences are integrated. The revision process decreases the more experience to have—something I’m grateful to hear!

One panelist said they would do a pass for continuity, another each for characters, description, dialogue, and language. That took 3 1/2 years for the first book because of all those layers. Later they got better, with quicker and fewer drafts. It’s now 2-3 months from the first word to the final draft.

Pay attention to your revision process and refine it.

Next up! How to add characters to that world…

The panelists did an excellent job covering a wide variety of character-related topics on this panel.

Yarbro said that characters tend to just come to her. For Martin, it’s more about what goes wrong, and then finding who else surrounds that person—everyone has a neighborhood, so figure out who’s least capable of dealing with this. Jackson said it’s a braided process for him—ideas come along and as they develop, more spawn.

Get into the habit of looking around yourself for characters. Think about what their stories are.

Read books written by people different from yourself, especially nonfiction. Men, gay, different ages, different cultures. Round out your experience.

Make notes in a book to study. Reread your notes. Put cliff notes on the book’s inside covers. Put page #s so you can check out your notes later.

Having multiple protagonists can help keep the secondary characters from taking over.

Think about where characters will run into each other. How can you make them a real person? Even the innkeeper should be a real person.

Sometimes, characters won’t meet up for a while, so they become a protagonist for that subplot, which means none become cookie cutter. The epic fantasy milieu forces you to make these disparate characters into real people. Often different cultures, so they’re very different sounding, and act differently.

Tertiary characters are flat. They don’t change. Don’t worry so much about making them real people.

Someone asked how to give a female protagonist a male companion without making her weak or making it seem like a romantic setup.
You can give the strong female character a male companion and make it impossible to be romantic. He’s her nephew, her student, her brother, her priest, or her son.

One interesting way to keep the reader guessing is to have both the protagonist and the antagonist as POV characters. From each one’s POV, the other is the antagonist.

They need to balance each other, though. If the bad guy has a social network, the good guy needs one too. Strong protagonists/personalities often like to surround themselves with strong people.

Even strong, capable characters have flaws or things they’re trying to work on. The difference between characters let them have natural relationships.

Sometimes your antagonist isn’t a villain at all. Not always good versus evil. But people disagree, or are on opposite sides of politics/religion, or their goals simply conflict.

Don’t overdo speech tags, but you can do something like in movies, by focusing on other stuff in the room. Cadences, speech patterns, diction, inflection, facial expression, gesture: these all help distinguish characters without speech tags. Look for the poker tells, the things that give a hint that the words themselves aren’t saying.

When writing dialogue between a couple characters, think about the 3 goals of the scene: each character’s goal (2) and the goal of moving the story forward. Dialogue isn’t like real life conversations.

Vernor Vinge’s Law: Any scene that isn’t accomplishing at least 2 of the 3 (Character, Plot, Backstory) needs cut or moved into another scene.

Social Media: Love It or Hate It?

This panel was a little bit of a letdown for me because everyone seemed to be on the “hate it” side. But I did glean a few pieces of good advice, which is why I’m sharing it with you. The first topic below really shows the variety of opinions the presenters brought to this panel.

Allen Steele came up with Steele’s Law: A writer’s output is in an inverse ratio with the time they spend on social media.

Someone else brought up the point that you can have a large output, but if no one reads it… But remember that every book is another way for people to find you.

It’s really a false dichotomy. Some authors manage to be prolific and do social media. Look at John Scalzi. David Brin is another great author to follow on social media and watch how he does it.

Chasing social media is a fool’s bet. It’s more important to have interesting things to say.

Not everything works for every writer. Hard science fiction may not benefit from social media quite as much.

One thing that social media can be good for is networking with other authors. The #1k1hour hashtag on Twitter and Facebook is how they push each other to write.

Once you get a (traditional) contract, 50% of your time goes toward marketing yourself.

Anyone can put their books up online. So you now have a discoverability hurdle, not a publishing hurdle. Social media can help readers find you.

Getting readers to try you though… free helps. Market your free book rather than telling people to buy your other books. 90% of your purchases come from online, even the paper books.

Social media feeds also help to pull in dynamic content into your static site. You need to have great things to say and a unique aspect of your book to get people to talk about you.

Romance readers appear to be omnivorous. Lots of SF/Romance crossover fans. Social media can help a variety of fans to find you.

The new generation considers Facebook to be for “old people.” Twitter helps you interact with your younger audience. Being personal helps you engage. Let your fans penetrate other social media networks for you, so you don’t have to be everywhere at once.

Don’t waste too much time in the self-congratulatory activity of engaging with current fans. But engage them enough that they’ll go get new fans for you.

Remember, you’re in this for the long haul. There’s no immediate payoff. You may want to avoid religion, politics, etc.

Follow and engage with people and groups who talk about things related to your books. In my case, that would be the apocalypse, mutants, shapeshifters, aliens, first contact, telepathy, magical enslavement, future tech.

Ask questions of your audience. Engage with the people who answer.

So on that note… What do you find social media good for? Engaging with fans or fellow writers? What are your tips for getting the most out of our new social world? Leave a comment below or find me as +Traci Loudin on Google+, the perfect place for fans of science fiction and fantasy to hang out.

My Other Dragon*Con Posts

This post is third in a series where I share the wisdom from the science fiction and fantasy authors who lectured at Dragon*Con 2014 in Atlanta, Georgia over Labor Day weekend. Clicking on the topics in Part 3 below will jump you back up to those sections.