Today I’d like to welcome +AmyBeth Inverness to Worldbinding. I’m honored she made this a stop on her blog tour for One Does Not Simply Walk Into Mordor, a short story in her scifi series The Cities of Luna, which will come out tomorrow. More on that below. She’s here to talk about how many of our favorite science fiction and fantasy books and series have played a prominent role in naming landing sites on our real-life moon.

The scientists, engineers, astronauts and other professionals in the early years of the space program were just as geeky as today’s Star Wars and Star Trek fans. You can see this inherent geekdom demonstrated by the naming of the craters, mountains, rilles and other features on the lunar surface.

The Apollo 15 site is a perfect example. In July 1971, astronauts David R. Scott and James B. Irwin spent a significant amount of time looking for the Rhysling crater, which is named after the blind poet in Robert Heinlein’s The Green Hills of Earth.

Unfortunately, there are no road signs on the moon (nor roads) and the topography looks much different when you’re roving around on it than it does when you’re looking at it from above. They actually stopped near the crater to take a sample, but weren’t aware at the time that the particular crater they were passing was Rhysling.

Google Moon is an excellent tool for exploring the Apollo landing sites. You can see the paths the lunar rover took on three EVAs (extra vehicular activity, meaning they were wearing spacesuits out on the surface) as well as many points of interest along the way.

East of Rhysling is Earthlight, named for the novel of that name by Arthur C. Clarke. Earthlight is set on the moon, about 200 years after the first landings. It was first published in 1975, shortly after the Apollo missions. 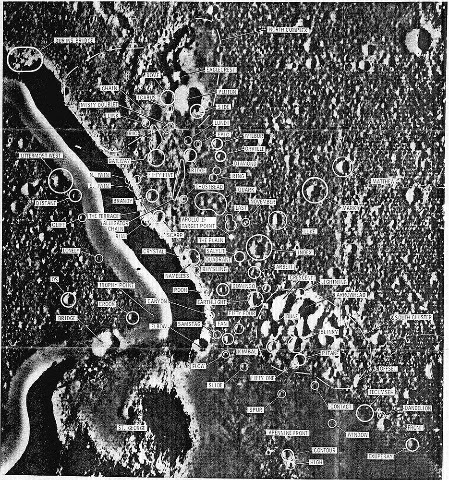 South of Earthlight is Dune, named after the far-future novel by Frank Herbert. There are also craters named for Winnie the Pooh, and Saint George of dragon-battling fame.

Google Moon doesn’t show the names of all the features. There are simply too many! But this image from NASA shows many more.

My favorite is Durin’s Bridge, which you see in the upper left corner of the image. It is an actual bridge across Hadley Rille, which is the black river-like feature.

This isn’t named after a book or character specifically; it’s named after a fictional bridge from J.R.R. Tolkien’s epic fantasy trilogy The Lord of the Rings. In an epic scene where the heroes are traversing the Mines of Moria, Gandalf turns to face the Balrog chasing them. The bridge crumbles, taking the Balrog with it, and Gandalf nearly falls in. The Balrog snags his leg and carries him down, but not before Gandalf utters the heart-wrenching words “Fly, you fools!”

Sir Ian McKellen gave an excellent performance in the 2001 movie The Lord of the Rings: The Fellowship of the Ring.

Durin’s Bridge on the Moon is not about to collapse under the weight of a balrog. It’s a solid mass that spans the rille. If water flowed through that valley, it would be Durin’s Dam. Once upon a time, it was formed by a volcanic basalt flow moving across the lunar surface. I’ve no idea what formed the bridge itself. With several robots visiting the moon in the past few years, we have better images than we did before, but a postcard with Durin’s Bridge in the background is a few decades off yet.

When it becomes available, I’ll send you one. And I’ll sign it “Wish you were here!”

A writer by birth, a redhead by choice, and an outcast of Colorado by temporary necessity, AmyBeth Inverness is a creator of speculative fiction and romance. She can usually be found tapping away at her laptop, writing the next novel or procrastinating by posting a SciFi Question of the Day on Facebook and Google+, often as part of the Speculative Fiction Writers Community we moderate.

When she’s not writing, she’s kept very busy making aluminum foil hats and raising two energetic kids and many pets with her husband in their New England home.
You can find her on Facebook, Google+, Ello @USNessie, and Twitter @USNessie or check out her Amazon Author Page.

The latest short story in her SciFi series The Cities of Luna comes out tomorrow, Saturday, December 6th.

One Does Not Simply Walk Into Mordor

Varen knows better than to trust his big sister, Usra, who has gotten him in trouble more times than he can count. But of all the shenanigans she’s perpetrated, getting them stuck outside their city of Mordor, in surface suits on the lunar regolith, takes the cake.

Comments Off on Moon Landings With Names From Fiction