In many ways, the story of how The Last of the Ageless came about is the story of my writing career. While I’ve written many other stories and novels, nothing has haunted me the way this novel has.

I wrote a story I called “Future Generation” at age 15. By the end of the year, I’d finished Chapter 14. In the original story, the main character’s father had been killed by the aliens, one of the few sources of conflict.

The story began thusly: “The young Mutant Dernex sat cross-legged in front of his newly made fire near the apparently nonnegotiable canyon.”

He had seven siblings, none named Mishnir.

Inspiration for The Last of the Ageless

By the next year, I realized I was too close to my source materials — Andre Norton’s Daybreak 2250 AD and K.A. Applegate’s children’s books — to keep going. By August, I’d had a close friend and my little sister read through what I had so far, which was at least Ch 20 at that point. I collected all their feedback and my own editing notes into a document and revised what I had.

I got too wrapped up in naming everything, especially Nyr’s clan, which I’d called the Death Clan up until then. My conclusion: “That’s too childish. Like Mount Doom.” There were three types of mutants at that time, and alien vocabulary peppered every chapter. The only one that survived to the final novel was omdecu.

By the time I went off to college, I had finished Chapter 22, leaving the novel at 87,337 words and no end in sight. The mysterious Wizard was a good guy, collecting a task force to unite the world in peace. Not much conflict there…

It had no ending because it had no conflict.

While away at college, very little happened with the novel. Most of my professors wouldn’t allow genre fiction in class. I had to take a genre writing course with Dr. Matthews to keep those muscles in shape.
Back to Top

The Return of the Ageless

From the first draft of the new Ageless novel

Three years after college, I’d written less than 35,000 words total since graduating. Most of that writing was thanks to my friend Liz, who exchanged writing prompts with me.

In September 2010, I began to return to my old novel, trying to decide how much I could salvage.

The original story kept bouncing around in my head, and I brainstormed some new ideas with another college friend, Lindsay. She helped me realize the Wizard and his cohorts would make excellent bad guys. During those talks, I also began to think of a secondary plot, which would eventually become Korreth’s half of the story.
Back to Top

When I decided to completely begin “Future Generation” anew, salvaging nothing but some character traits, I challenged myself to my own mini NaNoWriMo in November of 2010. I aimed for 30,000 words, and came up short… by 23,000! 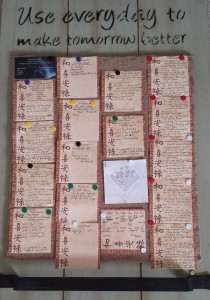 In April 2011, I started dallying with recording my writing progress in calendar form as another way of motivating myself. I wrote 5,000 words that month on “working title Ageless,” though I still thought of it as “Future Generation.”

And yet I found I had “no time to write” again until June. I wrote 1,168 words that month. It seems silly now.

In August 2011, I attended two different writers’ groups. One was a critique group. The other was Gail Z. Martin‘s Thrifty Author Success Network. A certain writer by the name of Darin Kennedy told me about another writers’ group, comprised mainly of science fiction and fantasy authors. And in September, I attended my first of those meetings, where writers would hang out at the coffee shop and chat and write together.

By October, I was still attending my original critique group, but I wrote less than 2,500 words.
Back to Top

On my mother’s birthday in 2011, I decided to get down to business. That was the catalyst. I wrote 7,200 words in November, rivaling my total word count for the entire rest of the year. In December, I wrote twice that.

The next year was very different. I attended several different writers groups: Gail Z. Martin’s group, the writers’ clutch coffee shop group, my old critique group, and the Charlotte Writers’ Club. I wrote the remaining 97,725 words of The Ageless and let it rest for 8 months while I wrote The Century. (A 90,000 word trunk novel… I may resurrect it someday.)

The rest is history. You can find out more about how I came around to self-publishing The Last of the Ageless, how I struggled with beta readers and schedules, and more by checking The Ageless tag and reading ye olde blog posts.