I have returned from my travels to the Carolina Renaissance Festival during Time Travelers Weekend! I was an author guest with Park Road Books this weekend. Together, Edward McKeown, J. Matthew Saunders and I sold each others’ books and signed them (our own, of course). 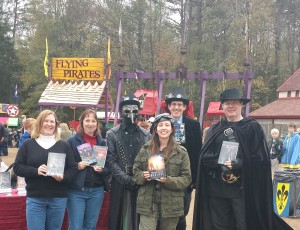 The Carolina Ren Faire broke record attendance on Saturday with over 15,000 attendees! Matthew and I were dressed as steampunks and Ed was a British colonialist (or a French swordsman on Sunday), traveling through time to the Renaissance. Together, our books spanned from 600 years in our past up through 50,000 years in the future.

After spending the entire day on my feet Saturday, I was exhausted on Sunday and made a few blunders including misspelling a Stefanie as Stephanie. She was gracious about it, though I felt absolutely terrible and corrected the spelling as best I could…

Ed, Matthew, and I made a great team, each with our own styles of pulling people in. Matthew had his dark and mysterious going on (perfectly in keeping with his subject matter), Ed tended to draw people in with friendly conversation, and I brought them in with, let’s admit it, my charming smile. ;D 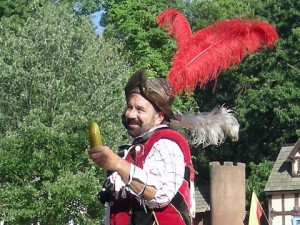 On Saturday, Miguel of the talented and hilarious Don Juan and Miguel troupe came by to show us his, errm, pulsating pickle trick… Yes, you read that correctly: We were treated to a very intimate and backstage viewing of how Miguel gets his pickle properly pulsating.

Sunday he dropped by again and joked something along the lines of, “Why can’t the apocalypse be happy?” 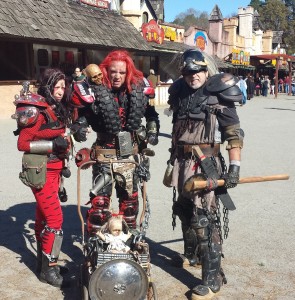 And despite that, for some reason, Miguel decided to make my day and buy my book. So I got to sign a copy of my book over to Miguel, who I’ve watched up on stage for the past several years at the Ren Fair! I was in shock and was probably grinning like an idiot the whole time.

Sherri Smith and Melanie from Park Road Books were tremendously awesome. I told them they surely spoiled me–I didn’t have to cart along any books, pack or unpack them, or count change because they did everything. All I did was smile, wave, warm over potential readers, and sign books.

I couldn’t have asked for an easier introduction to hand-selling my own books, which as it turns out, is an art form. I definitely stammered through my first few explanations of what the book is about.

Luckily, I’d gotten previous advice from John Hartness during ConCarolinas 2015 on how to make people feel welcome and get them interested.  The tough part was answering unexpected questions.

The question I was asked most often was, “Is this part of a series?” which is a tough question to answer since I wrote The Last of the Ageless as an open-ended standalone with series potential. So I would always answer by saying it stands on its own; there’s no cliffhanger, though if people really seem to love it, I’ll definitely write more in the series. This seemed to satisfy most everyone including the book blogger who proclaimed, “I hate cliffhangers!”

I also had a few people who asked for ebooks, which is another tricky question, since we were there with Park Road Books. We tended to tell them yes and refer them to our postcards and bookmarks OR they could get it signed right here and now.

How to Get a Signed Book Sent Anywhere

Speaking of which, if YOU want a signed paperback, please do contact Park Road Books, who will summon me from my lair to personalize a copy to you or anyone you’d like. Paperbacks make great gifts, after all.

Did you make it out to the Ren Faire this year? If you were there, please point me toward your awesome cosplay photos… C’mon, I know you took a bunch! You can find me at any of the social media sites at the top or bottom of this page.

Comments Off on A Record-Breaking Renaissance Festival