The Secret History of My Novel, The Last of the Ageless

Hi, everyone! Get the behind-the-scenes history of my post-apocalyptic novel, The Last of the Ageless. Let me know what you think in the comments!

When I originally created this world, I thought about creating a pidgin language to go with it. In that language, Nyr meant “Night” and Dernex meant “No Fear.” But after hearing people stumble over the name Dernex (which I pronounce as DARE-nex), I finally gave up and decided to rename him.

So I started investigating several options for Dalan. I ruled out Dalen, Daylan/Daylon, Dolen, Dallan/Dalon (which I knew people would mispronounce again), Daran/Darin/Darren, Calan/Caolan/Caelan, and Conlan/Conlen/Conlin/Conlon. I didn’t like the sometimes famous associations some of those name variations brought with them, and eventually settled on Dalan after testing out how people would pronounce it. Thanks goes to my mom for helping me out with that! I’m OK with either of the most common pronunciations I hear: DAY-lin or DAL-in.

I decided that the names of things and people should be corruptions of our modern-day languages. After a few centuries of people not being able to read, pronunciations would slowly drift from their original meanings.

The Ellsworth Air Force Base near Rapid City is the basis for the Hellsworth Tribe. After the apocalypse, a group of cut-throats took over the resources of the base, using it to their advantage as chaos ensued. Their descendants became the ruthless Hellsworth Tribe. In the earliest conception (back when I was in high school), I called Nyr’s group the “Death Clan.” I found this note to myself in 2002: “That’s too childish. Like Mount Doom. hehehehehe” Hellsworth Tribe is way cooler, right?

Searchtown was meant to be the corruption of “Research Town” an outpost that survived during the apocalypse where the US government made a last-ditch effort to gather a bunch of scientists to try to communicate with the aliens.

Korreth’s name was originally Sorreth, but I wanted to differentiate it from Soledad. Even I kept getting them mixed up! Ti’rros is adapted from Tirros, one of my World of Warcraft toons, whose name I took from Tirion Fordring (even though my toon was a Blood Elf paladin). Ti’rros in the book was actually a male until very late drafts.

Saquey was originally just named Sa (originally with an umlat over the a), but I kept losing track of that name in the text since it was so short. So I lengthened it, and at my wonderful editor Netta’s request, gave a little backstory to why Dalan chose that name.

Waaaaaay back in the day, I wanted to have three types of mutants. They were conceived of as: exties (weird exterior features), neuties (those who looked like normal peeps, but have awesome powers), inties (those who have mental powers). It wasn’t until later that I renamed them, and then eventually collapsed them all into the term Changeling, with different subgroups having clearly different powers, like mystics.

I owe the term transmelder to my father. As many of you know, I started writing what would eventually become this story when I was still a teen. I was talking to my dad about the shapeshifter’s powers, and how I didn’t want to call it “shapeshifting.” Lo and behold, he came up with “transmelder,” and I took it from there!

What else do you want to know about the secret history of The Last of the Ageless? 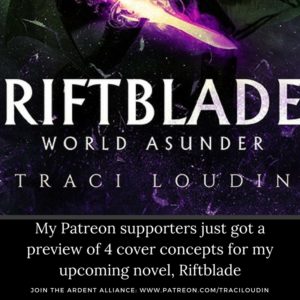 Did you know this post was originally released to the Ardent Alliance first? You can join right now and have instant access to all previous patron posts, plus get a preview of the book cover for my upcoming epic fantasy novel, Riftblade. And next month you can read an (unedited) excerpt from it!

Comments Off on The Secret History of My Novel, The Last of the Ageless