Why You Wish You Were Born on the Solstice

When preparing to write my upcoming epic fantasy series, The Rifts of Renjian, I did a lot of research. Celestial workings matter because summer and winter children become magic wielders, or Enchanters. Children born in spring and fall (known as the Meridian seasons) have no magic powers. So I studied the seasons and how planetary bodies move. 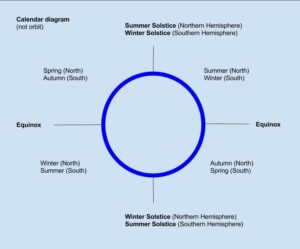 Our current calendar doesn’t measure seasons very well. Here’s how the seasons work relative to the solstice and equinox. (Click or tap to enlarge)

From an Earthly viewpoint 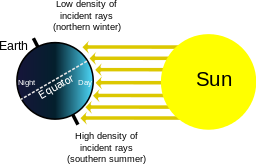 Created by Rhcastilhos for public domain

Based on the diagram above, you might think solstices happen when Earth is farthest in our elliptical (oval) orbit from the sun. But actually, the seasons (and equinoxes and solstices) are based on the axial tilt of our planet, NOT our orbit. When our southern pole is pointed as far as it can toward the sun, that’s the summer solstice in the southern hemisphere, or winter solstice in the northern hemisphere. Again, a diagram is helpful.

Tying it back to my epic fantasy

But those lucky children born on the solstice itself are the most powerful of them all. Those born on the equinox are completely powerless, along with all the other children born in the spring and autumn seasons. 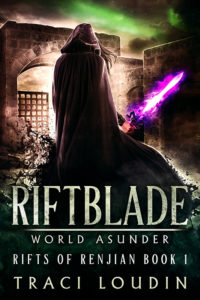 All this means that Renjian must be rather Earth-like. I didn’t want to create a world  too dissimilar to our own. Nor did I want to verge on writing a science fiction novel. This is an epic fantasy series after all!

But in case you’re wondering, YES, Renjian does have a similar axial tilt to Earth. This means the four seasons and solstices and equinoxes like ours.

Orbital dynamics come into play at the end of Book 1, and especially in Book 2. But I can’t tell you much more than that.

As you can imagine, planning your child’s birth date is a pretty big deal on Renjian. More about the calendar in a future post!

Subscribe to the RSS feed to get future blog posts, or join the Vanguard and get updates about my books and blog delivered to your email.

I believe stories help us understand the world and ourselves better. They help us live a fuller life. But that doesn’t mean we need to read stuffy “Literature” with a capital L!

Stories should be fun and adventurous! They should capture our imaginations and take us far from here. They should excite and terrify us.

Join me on my next adventure

Find out the instant I publish books in the Rifts of Renjian series by joining the Vanguard (newsletter), where I’ll only bug you when I have a new book coming out.

Help support this series and all future series I write by joining the Ardent Alliance. Find out more here: