With so much discussion in the blogosphere about self-publishing versus traditional publishing, I’ve been doing a lot of reading just to keep up. My conclusion is that a hybrid model is the path with the greatest reward for the fiction author. It also requires a great deal of work. What do I mean by hybrid? I’m glad you asked…

“Self-publishing” here refers to creating an ebook, which you will then publish to various retailers like Amazon, Barnes & Noble, Kobo, and Smashwords. You may also use CreateSpace or LightningSource to publish print-on-demand paper books, but that’s an entirely different topic. 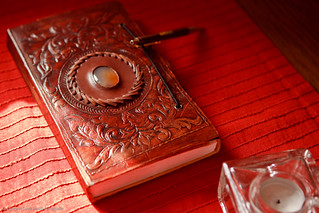 What I mean by “traditional” publishing is really more of a spectrum, ranging from small publishing houses to the larger well-known publishers. Most of my notes below apply more to the large publishers than the small ones, however.
END_OF_DOCUMENT_TOKEN_TO_BE_REPLACED

I’ve been a steady writer for over a year now, and I’m a little over halfway done with writing my futuristic science fiction novel, The Century. See my goals for 2013 and my thoughts about my progress so far after the jump.

The past week or so I’ve been wavering on whether I’ll write Part 3 of the Century before beginning revisions on The Ageless. Some of these goals may be flipped if I decide I need more time to let Part 3 marinate.

The first conventions I ever went to were JACON and Necronomicon when I was in college. I went with groups of friends, then didn’t really attend any cons again until last year, when I went to ConCarolinas (see my 2012 recap), ConTemporal, and MACE.
However, I didn’t have any real conversations with anyone at those except for a brief chat with James Tuck and a longer conversation with Bill Hatfield. This year I want to try to get out of my shell a little and really talk to other writers, even if they are published authors and therefore intimidating.

Last year I was one month late (see six-month checkup) finishing up the The Ageless on July 10. I’m hoping to keep on track with The Century this time around, especially since I now devote an additional day a week to writing compared to most of last year.
It took me about a month and a half to finish the main research and extrapolation I needed to get the ideas for The Century lined up. Actual writing on The Century didn’t begin until September. Since then, I’ve written an average of 3,669 words a week. I’d like to get that a little closer to 5,000.
In December I began hosting the Speculative Fiction Writers community on Google+, which has been great in helping me get out of my shell and talk with other writers in the genre. I hope to really connect with more people in 2013. And I’d really like to get more involved on Goodreads.
I’ve mostly abandoned chasing Facebook and Twitter, though I will continue to post stuff there on occasion.

In November, I decided to try to start writing four times a week as an ante-up instead of NaNoWriMo. As expected, everything fell apart around Thanksgiving. But it should also be noted there were other times I wasn’t able to write as much, such as when the day job interfered (sending me to a conference in October) or when I was simply stressed around the holidays.
If making a distinction between writing nights and research nights… In terms of actual writing, I wrote four nights per week once. There have been several weeks in which I worked on The Century four nights a week, doing research and whatnot. I’ve tended to average about three nights of actual writing per week since The Century got underway in September.
So, unlike some writers, I do count research, outlining, blocking out scenes, and so on as “work time.” Maybe if I didn’t have a day job, I could afford to only count actual writing days toward my four-times-a-week goals, but that’s a luxury I don’t have. I’d probably scare myself off researching and then the work would be worse for it.
My average words written per week (not counting the weeks in which no writing was done) was 3,669. Total word count since I began writing The Century is about 58,700. With those kinds of numbers, it would take me six months to write a novel, if I already had everything outlined and ready to go. Too bad it never quite works out that way!

Writing Is a Marathon

In past years, when I’d miss a few days writing, I’d beat myself up and give into a self-defeating attitude, which ultimately resulted in not writing for months. But now that I’m treating my writing more seriously and holding myself accountable, I’ve decided not to let life’s little stumbles get in my way. This has kept me going even when I had an abysmal week here and there.

You can see my writing calendar (where I record my progress) on the Current Projects page. I also put the dates of published blog posts along with conventions and writing groups I attended on the calendar to chart my growth as a writer.

If you’ve checked out my Projects and found them interesting, you can sign up for my newsletter, which will only be mailed out when I have an announcement about an upcoming book or story. That might be a while, and I promise to only email you once a month anyway.

Circle me on Google+, and if you’re a fellow writer of science fiction or fantasy, come join the Speculative Fiction Writers community. I’m also on Goodreads.

The last time I mentioned my goals, I said I hoped to avoid rewriting my near-future science fiction novel The Century. Unfortunately, over the past few weeks, it’s become clear that’s exactly what it needs.

I first began the concept of The Century in 2003. (See my timeline on Facebook.) In 2009, I revisited it, rewrote parts, edited, and otherwise muddled with the story. But I didn’t revise the basic idea.

The Future: Are We There Yet?

Now it’s 2012. Science and technology have come a long way since 2003. Check out a few of my original notes about the setting of The Century, in “the future”:

So basically, while I was hanging out, going to college, writing other stories, and slacking off for a few years, the future caught up to me. We’re living in the future already! Which means The Century needs to skip ahead some more.

Fast-Forward to the Future

Over the past few weeks (see my writing record), I’ve been researching the future. This may seem like a crazy idea at first — how do you research the future? My source list is a mile long, but mainly I looked for predictions about “If technology X continues advancing at this pace, in Year YYYY, we’ll have Z.”
Predictions vary of course, which is good, because that gives me a wider window of realism for the story. It’s also interesting to think about how different technologies might intersect, depending on how advanced each has become. Not to mention how technology shapes nations and cultures. We live among plenty of people who are in future-shock already.
At this point, most of my research about Earth is ready, which leaves me to ponder about Salvation. No viewpoint characters go to colonize Salvation in Book One, but since I’ll need to make references to the planet in this book, I’m going to need to know more about it.
All of these changes to the story’s universe will have major implications for the book and the way the characters relate to one another. For instance, in the first round of The Century, the fact that the characters age half as quickly as other people is a big deal. But far enough in the future, we may reduce the rate of aging, or even stop aging entirely, with something like nanotechnology. In which case, appearing to be 25 years old while actually being 50 won’t be much of a surprise to anyone.

My original plans were to finish writing The Ageless, then let it rest while I edited The Century, which I guessed might take four months or so. But now… Rewriting from scratch will probably take me about ten months, by which time The Ageless will have grown old and moldy.
On the other hand, now that it’s been about a month since I finished writing The Ageless, I could start editing it now, get it all polished, and send it off to beta readers. Then work on rewriting The Century.
Yesterday while pondering this quandary, I stumbled across a great article on The Fictorian Era called “Starting Over: A Most Exquisite Agony.” And that’s when I realized I should start rewriting The Century now.
In the years between graduating college and getting serious about writing again, I wrote maybe 37,000 words, or just over 9,000 words a year. Pathetic. So by writing (a.k.a. practicing) more now, and then editing The Ageless later, I’ll be in a better position to judge The Ageless on its merits.