A while ago, I talked about how I scoured the Internet for tips on self-editing a novel and concluded that three passes made sense. Today I’m back to share a checklist for revisions. (See the first pass here.)

Tomorrow, I’ll send the first five chapters of The Ageless off to my beta readers, which means I’ve already done most of the second and third passes on those chapters. I’ll talk more about the third pass in March.

The Purpose of Dividing Self-Editing Into Passes

As a copyeditor in my day job, I’ll be the first to admit that no one can truly self-edit. You’ll need outside eyes to spot all the errors your brain skipped. Dividing your editing into three passes can help you focus and avoid missing obvious things. (Though you’ll still need actual editors, of course.)

Additionally, it doesn’t make sense to polish up your prose on the sentence- and word-level when you haven’t finished slicing and dicing the scenes and chapters yet. During my first pass, I deleted at least three chapters, rewrote several chapters from scratch, and even added a few new ones. Polishing the prose on any of those beforehand would’ve been a huge waste of time.

That’s my revision board to the right. I do big revisions on the computer, and most of my notes are also on the computer. But sometimes, I have to think in ink.

Every writer is different, so what I’ve listed here may be part of your first pass or thirteenth pass. But if you’re trying to find a place to start, this may help. For me, there was some slight overlap between Pass 1 and Pass 2.

The examples above are from early drafts of The Ageless. The checklist itself is inspired by suggestions I found on the sites below, my own hurdles (problems that kept cropping up), and feedback from my wonderful critique partners on what I should improve. For example, I often added way too much internal monologue during fight scenes, which would slow down the action.

Along the way, I’ve learned that writing the novel is quite possibly the easiest part. Revisions take time. I toiled over the first pass for an entire year, which you can always see on my writing calendar. I’m hoping future books will go a lot quicker!

Resources for Revising a Novel

Are you in the throes of editing a novel? Leave a comment below or find me as +Traci Loudin on Google+, the perfect place for writers of science fiction and fantasy to hang out.

Oftentimes, you hear the writing advice, “Treat it like a business.” When authors say that, most of the time what they mean is you have to write even when you don’t feel like it. Which is true. As E.B. White once put it, “a writer who waits for ideal conditions under which to work will die without putting a word on paper.”

But sometimes, people go a little bit overboard. They interpret it as, “Thou must write every day to be a real writer!” and take it to extremes. 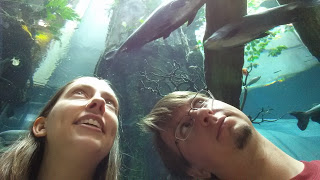 Traci and Dorian at the Academy of Science

I’ve just returned from a six-week writing hiatus. Zealots of the “treat it like a business” concept might scoff. “I write even when I’m sick,” they’d say.

I’ve heard numerous successful authors say they write even when under the weather, and they can’t tell the difference between what they write while sick vs. while feeling well.

But does that mean we should never take a break? NaNoWriMo encourages people to write every day, after all.