In the Company of Writers

It’s inspiring being around other writers, even if they don’t write science fiction and fantasy books. I recently attended the 90th anniversary party for the Charlotte Writers’ Club and listened to fellow science-fiction writer Gretchen Hummel read the intriguing beginning of her post-apocalyptic novel, Dreamer’s Island. While listening, I reflected on how challenging it is to read an excerpt of a science fiction novel aloud to a mostly non-SFF audience.

I’m more of a visual reader than an auditory one. A sentence may make me stop and think, but an audiobook would keep going while I’m sorting through what it all means or implies. I miss the next sentence or two while off in my own head. Same thing during a voiced reading. While reading on the page (or the screen), I can stop and contemplate what’s happening before continuing at my own pace.

So if other people in the Charlotte Writers’ Club are similar, and they’re not used to our genre, it must have been even more daunting for them. In talking with a few people in the meet and greet afterwards, my suspicions were confirmed.

Of course Gretchen only got a chance to read a small portion of chapter one since there was a five-minute restriction. But right up front you have a lot of information for listeners to process and question:

It’s tough! That’s one of the challenges of our genre: the steep learning curve at the beginning of the story. One of the things that attracts me to science fiction and fantasy — learning about a new world — is the same thing that drives many readers away.

It was fun having a chance to mingle (and watch) other writers. Some were very reserved wallflowers, while others were loudly chatting each other up. But perhaps those were the members who’ve gotten to know each other.

I still think of most writers as being rather introverted, despite the new concepts of being in close in touch with one’s readership through blogging, Twitter, and so on. It’s easy to be an introvert and still “connect” with people online. In person, not so much.

One lovely lady, Pam, came up and started chatting with me out of the blue, which (as my grandmother would say) tickled me pink. Especially since one of the nonfiction pieces someone had read earlier touched on the topic of Southerners striking up conversations with strangers. Sure enough, Pam’s from Charlotte. Her friend Lydia is from Boston, and she also came over to chat.

Soon Lydia and I were immersed in a conversation about our recent writing habits. Amusingly, the two of us couldn’t be more dissimilar — I’m from WV, she’s from Boston; I’m in my twenties, she just turned sixty; I love SFF, she doesn’t care for it; and so on. But she’s in roughly the same position in her career as I am.

She said she’s recently started freewriting and has started trimming down the unimportant things in life in order to write more. So she’s pared down the everyday distractions and is just super focused on the art and freedom of writing. And we both love it!

It felt good to be in a room with so many other writers. It was like we were invigorated by each other’s creativity and enthusiasm for the art. If that’s what the Charlotte Writers’ Club feels like at every meeting, I’ll be signing up soon, despite the lack of SFF love. Who knows? Maybe I’ll recruit some of the SFF enthusiasts from my other writers’ group and get some cross-pollination going. 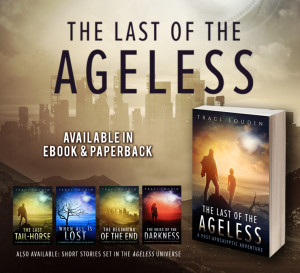 Get four short stories FREE when you join the Vanguard (my email newsletter). You’ll also get a fifth, exclusive short story set after my novel The Last of the Ageless — this short story is only available to my followers! Plus you’ll get another FREE short story in fall 2017.

Comments Off on In the Company of Writers